Not all action cameras are supported by ActionStitch, due to one or more of these problems:

We have tested the following cameras:

At this time, our suggestion is to get GoPro 10 if your budget allows, and GAMSOD 6k30fps otherwise.

If you already own a camera that is not in the above list and can't decide if it can be used, let us know and we'll help you figure it out. We'll also help you obtain the camera calibration data needed by ActionStitch.

This drawing illustrates how you would place 2 cameras next to each other. 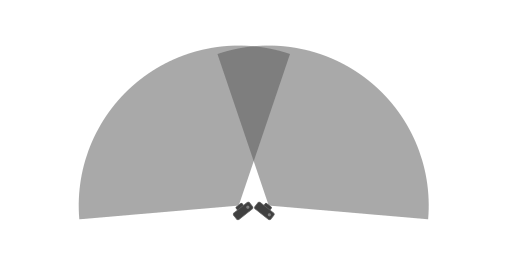 Most action cameras have a horizontal Field of View (FOV) of about 120 degrees. Some of them claim to have a 170 degree FOV, which actually means the diagonal FOV. To make the 180 degree view, you'll need to place 2 cameras at an angle of 80 to 90 degrees. This will create an overlapped area of roughly 30 degrees, which should be sufficient for ActionStitch to find a good number of feature points that can be seen by both cameras.

You should also expand the coverage to a little bit more than 180 degrees to give enough space for cropping or in case if cameras are not facing precisely the right direction.

Currently there isn't any dual camera mount available on the market designed for this purpose. But, there are several ways to make one. The recommended way is 3d printing. You can print one from the following list if you own or have access to a 3d printer, or you can use a 3d printing service such as Craftcloud.

If the camera you decide to use is not on the list, please send camera dimensions to us and we'll try to create the 3d model.

It is also possible to make your own mount with an aluminum bar, or modify an off-the-shelf dual camera mount. However, a 3d printed mount is much easier to set up.

It is highly recommended that cameras should be placed on a tall tripod, at least 12 feet, to make the video look so much better. There are many tall tripods that are 12 or 13 feet sold as light stands on Amazon but they are perfectly fine to be used as a tripod, as action cameras are usually lightweight.

For outdoor big fields you may need one as tall as 20 feet. Tripods in this range can be quite expensive. The cheapest one that turned out to work well is Glide Gear TST 20, which has a price tag of $299.

Important: when you set up a tall tripod outdoor in a windy day, make sure to hold the tripod with your hand all the time, or put down weight bags on the tripod legs to stabalize it.